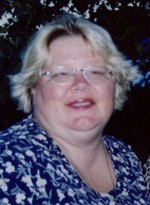 Amy Louise Drexler Egner, age 60, of Oshkosh, passed away from cancer Wednesday evening, December 11, 2019, at Edenbrook in Oshkosh. Born on June 23, 1959, in Oshkosh, the youngest daughter of Aloys Charles and Janet Dahl Drexler, Amy married Greg Egner on October 16, 1999 and they just celebrated 20 years together.
She was previously employed at Lakeside Packaging, which she enjoyed. Amy was a member of Oshkosh Choraliers Community Choir for many years. Being a part of that esteemed group was the highlight of her life as she loved singing more than anything. Now our sister, Amy, is singing in the greatest choir of all up in heaven with the angels and loving that!
Survivors include her husband, Greg Egner of Oshkosh; her sisters, Pamela Drexler Audette, Wendy Drexler Baier, and Terri Drexler Foss, all of Oshkosh, Julie Drexler of Missoula, Montana; her brothers, David (Arlene) Ruddy of Avada, Colorado, James (Vicky) Ruddy and Tom (Linda) Ruddy both of Oshkosh; step-sisters, Kathi (Tim) Pagel Archer of Texas, Debi (Mark) Pagel Rolfing of Hawaii, and Dawn Pagel Beahm of Oshkosh. Amy had several nieces and nephews in Oshkosh and across the country. She was close to Evan and Sam Ruddy and great-nephew, Brian Stark, all of Oshkosh. Preceding Amy in death are her parents; stepmother, Mickey Drexler; maternal grandparents, William and Marion Dahl; an uncle, James Dahl; a niece, Courtney Stark; and stepsiblings, Patti Pagel Kaminski and Dan Pagel.
A time of visiting and sharing of memories will be held on Saturday, January 11, 2020, from 1:00 to 2:00 p.m. with a Memorial Service to follow at 2:00 p.m. in St. Andrew Evangelical Lutheran Church, 1100 E. Murdock Street, with Reverend Karen Jewell officiating.
Amy’s family would especially like to thank the congregation at St. Andrew for their kindness and embracing our little sister Amy and her husband Greg. In lieu of flowers, memorials to your local Salvation Army in Amy’s memory would be very much appreciated. Online condolences to the family may be given at www.seefeldfuneral.com.