To share your memory on the wall of Cliff Eichman, sign in using one of the following options:

Cliff married Helen Luebke on May 26, 1948 and together they shared 72 blessed years. He proudly served his nation during World War II in the U.S. Coast Guard. Cliff was known as a hard worker and had an excellent work ethic. He spent many years working for Segor Construction and the Oshkosh school system. He spent many hours outdoors gardening, doing lawn-care, shoveling, and biking. Cliff was a jack-of-all trades building and repairing things. He was a loving husband, father, and grandfather. He was a devout and charter member of Cavalry Lutheran Church. Cliff will be greatly missed by all who knew him.

The family would like to thank all of the compassionate and caring staff at Elijah’s Place.

Memorials may be sent to Cavalry Lutheran Church or Elijah’s Place in memory of Cliff.
Read Less

To plant a memorial tree in honor of Cliff Eichman, please visit our Heartfelt Sympathies Store.

Receive notifications about information and event scheduling for Cliff Eichman

There are no events scheduled. You can still show your support by sending flowers directly to the family, or planting a memorial tree in memory of Cliff Eichman.
Plant a Tree

We encourage you to share your most beloved memories of Cliff Eichman here, so that the family and other loved ones can always see it. You can upload cherished photographs, or share your favorite stories, and can even comment on those shared by others.

Plant a Tree in Memory of Cliff Eichman
Plant a tree 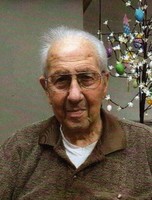