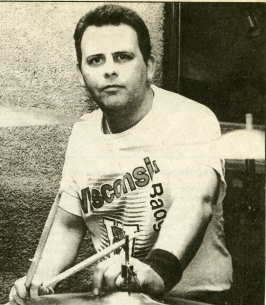 As a child, Dan grew up and attended school in the Nordheim area of Oshkosh, WI. He travelled with his family during the summer in the amusement business. Dan received his first drum kit at the age of 9. This was the beginning of a lifelong love of music. As a teenager, Dan packed up his drums in a van and drove to Florida. He began his career with the Dick Peterson Orchestra as the youngest big band drummer in the country. After that, he travelled the United States playing in bands across the country. Dan lived and played in bands in San Francisco and Los Angeles. He also worked as a studio musician for Casablanca Records in Oakland, CA. Upon returning to Wisconsin, Dan lived in Madison and eventually returned home to Oshkosh. There he would meet his future wife, Cheryl. Dan married Cheryl A. Moore on March 18, 1989, at First United Methodist Church in Oshkosh. Dan and Cheryl were so happy to be parents of two wonderful sons, Drew and Dylan. Dan spent many years as the house sound engineer at Barney’s in Oshkosh, running sound for local and national acts. He also owned D.B. Sound Studio, recording and engineering sound for many local bands. Dan owned and operated DB Paddock Lounge in Oshkosh, which was previously owned by his parents under the name of the Honey B. The Paddock was known and loved for the Thursday night jam featuring the finest area musicians. Dan enjoyed cooking, grilling, riding motorcycles, driving stock car and playing with his beloved puppy Roadie. He was a people person who loved spending time with his friends and was a very proud father of his sons. Dan loved all kinds of music and had a wonderful talent for being able to play any style. He played with many bands over the years some of which include Spirits of the Past, The River City Shuffle Band, Lezlie Thriller, Dynasoar, Strange Agent, Uptown Rebels, Stavenchain, The Rockin’ Bones, The Groove Pilots, Chris Aaron and Coldshot, and The Planet Smashers.

Dan is survived by his wife of 32 years, Cheryl A. Bush, his sons, Drew D. and Dylan K. Bush, his brother, Walter W. (Hope) Bush, sister-in-law Melissa Moore Nooe and nephew Christiaan Nooe all of Oshkosh, mother-in-law Carol Moore of Brillion, five nieces, a nephew and many cousins.

Dan was preceded in his death by his parents, Walter and Honey Bush, his sister, Sandra Bush, and his niece, Charlotte Nooe.

A gathering of friends and family will be held at Seefeld Funeral Home, 1025 Oregon Street in Oshkosh on Thursday, September 9 from 5:00 – 7:00 pm.