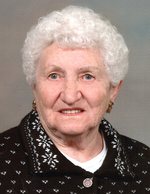 Ferne E. Schmutzer, age 101, passed away on Wednesday, December 11, 2019. Ferne was born in Ripon on April 15, 1918 the daughter of the late Henry and Elsie (Boers) Schlagel. She graduated from Ripon High School. Many of her earlier years were spent helping on her parent’s farm. Ferne did many other things including working at the canneries in Ripon and Rosendale, eight years at Mondl Shoe Factory in Oshkosh, and 28 years at Badger Lumber Furniture Factory in Oshkosh. On June 28, 1958 she married Edward Schmutzer, Jr. at St. John Catholic Church, now known as St. Jude, in Oshkosh. Ed passed away on January 1, 1989. Ferne enjoyed nature, fishing, hunting, gardening, snowmobiling, and blue and black berry picking at Crooked Lake. She will be remembered for her outgoing and friendly nature.

The family extends a special thank you to Kindred Hearts of Green Lake and Heartland Hospice for their wonderful care.