To share your memory on the wall of Harvey Western, sign in using one of the following options:

Provide comfort for the family of Harvey Western with a meaningful gesture of sympathy.

Early Friday morning, Oct. 11, 2019, ninety-three year old Harvey Vern Western announced, “I think I am going.” Being a straight-talking man of his word, he did just that. Harvey would say, “you betcha.” Harvey was born Sept. 20, 1926 in Thorp, WI to Edward and Clara (Thielke) Western. He was the fourth youngest and last survivor of twelve children born into his Norwegian-German family. He graduated in 1944 from Stanley High school, in Stanley, WI where he excelled in math, his favorite subject. He was drafted into the Army five months out of high school and served in Europe in WWII starting in Nov. 29, 1944. His specialized training and strong math skills were required in his position as an Army “Technician Fifth Grade.” [Tech Corporal]. Eighteen months of his service was in Nuremberg, Germany during the Nuremberg trials where he took on additional duties when he became the General’s Assistant. He was honorably discharged on Aug. 21, 1946.
Harvey, fresh out of the military, found employment in the Midwest cheese factories owned and operated by his older brothers. While working at Lone Elm Cheese Factory, in Nekimi, WI.; Harvey met his life’s special love, Alice Hinz. Alice lived across the road from Lone Elm and was anxious to meet “the new cute guy” working there. It was the start of their love story and our family’s history. They married Oct. 20, 1950 and a few years later raised three children on their 40-acre farm across the road from Lone Elm. After a few years working and managing cheese factories, and a short stint at the foundry, Harvey found his life’s work on the Soo Line, holding numerous positions. He worked as a fireman, switchman, yardman, and retired after 35 years in 1989 as a brakeman.

Harvey was a lifelong learner with a curious mind, who kept up on the world and far ranging topics his adult children would bring up by being an avid reader of magazines and newspapers. He was a huge fan of all sports, especially the Packers. He looked forward to going to Press Lake Camp in NW Ontario, Canada to catch the BIG ones. It was the perfect combination of family, cold beer, fish, cribbage, Sheepshead, and the strongest, stinkiest Limburger cheese, in other words, BLISS for Harvey. He was an expert Black Jack player and jumped at every chance to go to the casinos to showcase his talent. He had quite the green thumb, producing beautiful, bountiful, bushel baskets full of produce; a life-skill he passed on to interested offspring. He was especially proud of his cucumber recipe, “Harvey’s Cuke Salad” that we all tried to replicate but somehow it never tasted as good as his. He was very good with children and had a wonderful singing voice, most noticed when singing, “The Wabash Cannonball,” while bouncing a little one on his knee. He would take music requests as long as you chose “Wabash Cannonball” or “Old Suzannah.”... so we always did. Harvey was usually pretty quiet, but sometimes out of the blue, quiet Harvey, with a twinkle in his eye and a huge grin would let out a humorous, sometimes snarky one-liner, many times about how the coffee tasted. He really enjoyed getting a reaction out of people, and making them smile. His humorous sayings and one liners are legendary and many of us will be repeating his words, with a smile, remembering him in the years ahead.

Harvey’s gentle matter of fact, can-do, glass half-full outlook on life carried him through many of life’s challenges and became a role model for all of us. As his body continually lost strength and function over the years, he was forced to accept and adapt to his new circumstances, which he did in a go-with-the-flow attitude. Amazingly he never lost his ability to find joy. This is the legacy he leaves us ...his final gift. Harvey was a kind, attentive, loving father, grandfather, and great grandfather and father-in-law; we were so thankful to have him in our lives.

Our heartfelt appreciation to all the many wonderful, loving caretakers and staff who have helped Harvey, as his condition progressed over the last 13 years at Evergreen Retirement Facility. Thank you to Evergreen’s Pastor Steve who sang beautiful hymns and bible verses while playing guitar for Harvey, bringing him much joy. Thanks also to Pastor Reiff of St. John’s Lutheran Church, in Nekimi, for all of his help and spiritual support; and the Women of the church for all of their work on our behalf. To all of you, we are forever grateful.

Funeral services will be held at St. John’s Lutheran Church, Nekimi, WI - Saturday, Oct. 19, 2019 at 11:00 am; Visitation 9:30-11:00, prior to the service; burial to follow service at St. John’s Cemetery [adjacent to church], followed by a luncheon in the church’s fellowship hall.

In lieu of flowers, if you’d like, donations in memory of Harvey would be appreciated to:
Rawhide: E 7475 Rawhide Road, New London, WI, 54961 [rawhide.org]. Harvey spent a number of years volunteering there, driving cars for their auctions. Michael J. Fox Foundation can accelerate the Parkinson's research [michaeljfox.org].
Read Less

We encourage you to share your most beloved memories of Harvey here, so that the family and other loved ones can always see it. You can upload cherished photographs, or share your favorite stories, and can even comment on those shared by others.

Khani Sahebjam and SRF Consulting Group have sent flowers to the family of Harvey Vern Western.
Show you care by sending flowers

Posted Oct 15, 2019 at 10:13am
Here is picture of Harvey with biggest walleye he caught in Canada 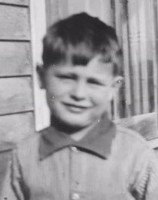 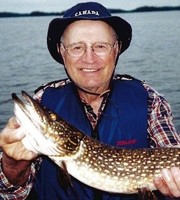 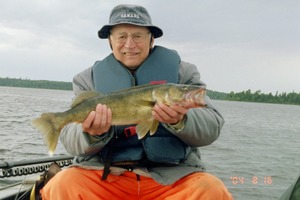