To share your memory on the wall of John Klescewski, sign in using one of the following options:

Print
John Walter Klescewski went to meet his beloved wife on August 7, 2019, at Aurora Medical Center. He was born in Armstrong Creek, WI on November 22, 1924 the son of the late Kasmier and Mary (Kuzma) Klescewski.

John, a proud Polish-Amer... Read More
John Walter Klescewski went to meet his beloved wife on August 7, 2019, at Aurora Medical Center. He was born in Armstrong Creek, WI on November 22, 1924 the son of the late Kasmier and Mary (Kuzma) Klescewski.

John, a proud Polish-American, served in the Army during WWII, participated in the Battle of the Bulge and then remained in Germany and France during the Occupation.

After returning from the war he worked a number of jobs until settling at the Calumet and Hecla Lumber Company in Goodman, WI. He married Irene Wierzbicki in June, 1948, in Goodman, WI. They had two children, Linda and Kenneth.

During the late 50’s the family moved to Oshkosh where John started out working at McDonalds and eventually became a Master Plumber establishing his own successful plumbing business.

After retirement, John and Irene enjoyed numerous road trips to California to visit their son and his family.

John enjoyed cars, especially his many Cadillacs. He spent many hours cleaning, polishing and driving his cars. He particularly enjoyed being in the woods and the many years of deer hunting with his son. One of John’s passions was to return to the Goodman and Armstrong Creek area to maintain relationships with relatives and old friends, and change the calendar in the hunting cabin. John was a lover of polish sausage (kielbasa) and constantly searching for the best.

For many years John cared for his ailing wife until her death in 2014. After Irene passed, John, at the age of 90, learned how to bake excellent cakes and pies to satisfy his sweet tooth.

John enjoyed excellent health up until a few years before his death. He was able to remain in his home maintaining the lawn and still hand washing his Cadillac.

As a devout Christian, John was indebted to Lillian and Ken Berndt, for their Spiritual guidance and support.

To send flowers to the family or plant a tree in memory of John Walter Klescewski, please visit our Heartfelt Sympathies Store. 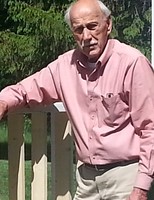