To share your memory on the wall of John Stromske, sign in using one of the following options:

John was a big fan of Elvis, and even though he was never able to drive, enjoyed hot cars.
John is survived by his sister and brother-in-law, Claudeen (Gary) Ross, and several nephews and nieces. His parents precede him in death.

John was a Christian by faith and a member of First English Lutheran Church of Oshkosh.
The family of John Stromske would like to thank Wisconsin Heights (Clarity Care) for the care they have given John through the years, and also Heartland Hospice for their care and compassion through his final time.

There are no events scheduled. You can still show your support by sending flowers directly to the family, or planting a memorial tree in memory of John Thomas Stromske.
Plant a Tree

Plant a Tree in Memory of John
Plant a tree 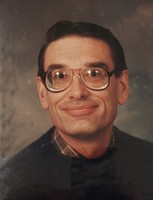