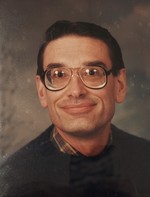 John T. Stromske, age 72, of Oshkosh, passed away on Friday, October 25, 2019. John was born to Clem and Grace (nee Schnable) Stromske in Madisonville, KY on July 3, 1947. His family moved to Oshkosh when he was a young age and has lived here ever since. At age 33, John moved into a group home and worked occasionally for Work Adjustment. For the last number of years John has lived at Wisconsin Heights (Clarity Care) and has enjoyed his time there.

John was a big fan of Elvis, and even though he was never able to drive, enjoyed hot cars.
John is survived by his sister and brother-in-law, Claudeen (Gary) Ross, and several nephews and nieces. His parents precede him in death.

John was a Christian by faith and a member of First English Lutheran Church of Oshkosh.
The family of John Stromske would like to thank Wisconsin Heights (Clarity Care) for the care they have given John through the years, and also Heartland Hospice for their care and compassion through his final time.

A Private Service was held.