Obituary for LeRoy A. Huebner 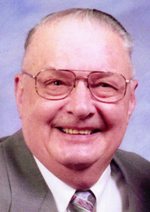 LeRoy A. Huebner, age 90, passed away on Sunday, January 31, 2021. He was born in Berlin and raised in Dale, WI on October 18, 1930 the son of the late Alvin and Linda (Beyer) Huebner. On May 15, 1954 he married Marilyn Testin. She preceded him in death in November, 1991. On February 13, 1994 he married Joanne Schultz, who preceded him in death in November, 2015. LeRoy was proud to serve in the U.S. Marine Corps from 1951 to 1954. He was a parts and service manager for McDaniels Motors for most of his working years. LeRoy was an avid hunter and was known for his wonderful wood working which included grandfather clocks. He will be remembered for being active at Faith Lutheran Church and even drove members to the services.

A visitation will be from 10:00 a.m. until the time of the funeral service at 12:00 p.m. on Monday, February 8, 2021 at Seefeld Funeral Home, with Rev. Andrew Martens officiating. Burial will be in Dale Union Cemetery, Township of Dale. A memorial fund in LeRoy’s name is being established for Faith Lutheran Church, Oshkosh.