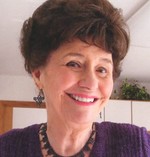 Marjorie A. Schneider, age 84, of Oshkosh, passed away on Tuesday, October 8, 2019, at Eastbrook Manor in Oshkosh. She was born on June 1, 1934, in Manchester, England, the daughter of Harry and Ethel (Whitacker) Lee. She married John Schneider and he preceded her in death.
An Oshkosh businesswoman, Marge owned and operated Marjorie’s Wig and Lingerie for many years before retiring in the late 1980’s. She enjoyed belly-dancing and was the founder of Phoenix Mideastern Dance Troupe. She was an artistic lady, making drums and jewelry, not only for the dance troupe but also for the community of Oshkosh. When she was at home her oven was always in use baking various types of bread.
She is survived by a daughter, Denise (Jack) Schlaeger of Plymouth, Minnesota; a grandson, John (Tina) Nolte of Oshkosh; a granddaughter, Samantha (David) Williams of Rochester, Minnesota; five great-grandchildren, Devin Williams, Zachary Nolte, Jordyn Williams, Adilyn Williams, and Karli Hohn; and a sister, Jacki (Eddie) Kennedy of England. Marge was preceded by her husband, Jack Schneider, in 2005, and by her parents.
Graveside funeral services will be held Thursday (TODAY), October 10, 2019, at 10:00 a.m. in Brooks Cemetery (corner of Hwy 41 and Brooks Road). Online condolences to the family may be given at www.seefeldfuneral.com.