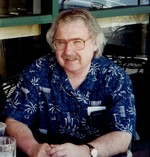 Michael J. Wertel, passed away in his home with his wife, September 20, 2019 of heart failure after extensive cancer treatments. He was born August 19, 1948 in the town of Eaton to John and LaVerne Wertel. Michael went to Luxenburg High School and graduated UW-Oshkosh with a bachelor’s degree in English Literature. He served for two years in the US ARMY from 1969 to 1971 during the Viet Nam War and was awarded the National Defense Service Medal for Expert Rifleman.
Michael married Pamela Thorp on June 27, 1998 at St. Andrews Lutheran Church in Oshkosh. He worked for the US Postal service serving in many different positions. In his spare time he was a musician, a writer, a poet, a historian, and he studied his family’s genealogy. He was a kind, intelligent, humorous, and spiritual man who always tried to be positive through life’s difficulties. A conversation with Mike was always interesting and such a joy, no matter how long it went on. Aaron Baer and his Kickbutt bandmates meant so much to him. He had a blast. Michael loved to read and had a huge collection of books, spread around the house.
Michael is survived by his wife Pamela Thorp; his mother LaVerne Wertel of Green Bay; brothers, Bob (Sonja) Wertel of Oshkosh, Tom (Pat) Wertel of Green Bay, Dick (Sharon) Wertel of Green Bay; mother-in-law, Pauline Thorp of Spooner; brother-in-law Roger Thorp of Oshkosh; sister-in-law Roxanne Hanrahan of Spooner; and many nieces, nephews, cousins, and friends.
He is preceded in death by his father, John Wertel; and father-in-law, Arnold Thorp.
Services will be held on October 19, at 1:00pm at Hilton Garden Inn, 1355 West 20th Ave, Oshkosh WI, 54902.
Special thanks to Theda Care Home Health, especially Jessica Syring.