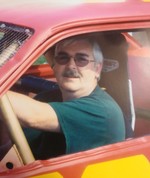 Michael “Mike” J. Wilke, age 61, of Oshkosh, died Saturday morning, December 7,2019, at Mercy Medical Center. Born on March 6, 1958, in Oshkosh, the son of Glen and Joan (Quint) Wilke, Mike married Robin Hanneman of Oshkosh in 1979.
Employed by General Beverage of Oshkosh for 29 years, Mike enjoyed going “up North” near Wausaukee where he fished and took photos of nature. He liked to drive a golf cart on outings and play darts with his good neighbor, Jeff. Mike enjoyed watching his TV shows, especially black/white Westerns and police/detective dramas.
Survivors include his daughter, Jamie Wilke of Oshkosh; his brother, Steven (Candace) Wilke of Omro; and nieces and nephews. Preceding Mike in death is his wife; parents; and two brothers, Rick and Dennis Wilke.
In keeping with Mike’s wishes, no formal funeral services are planned at this time. Online condolences to the family may be given at www.seefeldfuneral.com.