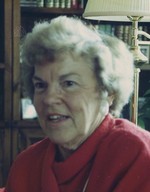 She was born November 7, 1918, in Essex, Iowa, to Emily and Sigfred Nordstrom, the youngest of four children. Later the family moved to Sioux City, Iowa where she graduated in 1936 from Central High School, then to Minneapolis, MN, where she worked and attended the University of Minnesota. There and in her church Messiah Lutheran, she met Hugh Hinderaker whom she married October 18, 1941. World War II years were in New York City where Hugh was an FBI agent and she was secretary in the national Methodist Information office. In 1945 they moved to Hartland, Wi., where they purchased and developed the Hartland News into the Lake Country Reporter. In 1962 they moved to Oshkosh, Wi., where he developed Manpower, Inc., and she became assistant women’s editor of the Daily Northwestern. His accidental death occurred in 1972. She married Theodore Hasse in 1975. Together they spent many years together traveling the world and enjoying time with their combined families until he died in 1993. She lived her remaining years enjoying reading, gardening, traveling, volunteering, hosting and attending family events, and generously helping anyone in any way she could.

She was a longtime member of St. Andrew’s Lutheran Church, Oshkosh, where she taught Sunday School, was Secretary and on church council, and was long involved in its Lutheran World Relief quilts program. She delivered Meals of Wheels, was a Paine Art Center docent, and a member of Learning in Retirement and PEO Chapter AG.

Miriam will be remembered for her joy of life, for her strong Christian faith, for her positive spirit, her belief in the good in all people, her kind gentle manner, and for her genuine interest in and concern for others. Miriam was devoted to, and was dearly loved by her family, and by countless friends. She will be dearly missed and forever in our hearts.

The family is deeply grateful to all the staff at Gabriel’s Villa for the extraordinary gentle loving care they have extended to Miriam over the past few years and especially over the last few weeks. Due to the coronavirus a private family service will held at St. Andrew’s Lutheran Church with Pastor Karen Jewell officiating. A celebration of life will be held at a later date. In lieu of flowers memorial contributions may be made in Miriam’s name to Gabriel’s Villa, 215 N. Westfield St, Oshkosh, WI 54902, or St. Andrews Lutheran Church, 1100 E. Murdock Ave, Oshkosh, Wi 54901.