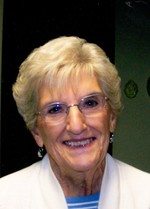 Myra L. (Schroeder) Amundson, nee Behm, age 91, of Oshkosh, passed away Saturday evening, December 21, 2019, at Aurora Medical Center. Born on August 24, 1928 in Saxeville, Wisconsin, the daughter of Walter and Mabel (Pagel) Behm, she graduated from Neenah High School, Class of 1946. Myra married Marvin Schroeder on May 3, 1947, at Trinity Lutheran Church in Neenah and he preceded her in death on March 12, 2001. On December 17, 2004, Myra married Richard Amundson Sr. She was a member of Grace Evangelical Lutheran Church in Oshkosh.

Never one to sit still, Myra worked from the time of her graduation. She was employed by Sawyer Paper Company of Neenah, Miles Kimball Company, Oshkosh Daily Northwestern and for the last 22 years of her career with the University of Wisconsin-Oshkosh Foundation in 1968 as a secretary and retiring as the Administrative Assistant to the Chancellor in 1990.

Myra was loved and admired by all who knew her. As soon as someone met her, they were impressed by her smile and kindness. She always kept a positive attitude and would not say a bad word about anyone. She was a hard worker and always willing to help. She will be greatly missed.

Memorial funeral services will be held on Saturday, December 28, 2019, at 11:00 a.m. in Grace Evangelical Lutheran Church, 913 Nebraska St., Oshkosh, Wisconsin. Entombment will be at Lake View Memorial Park in Oshkosh. A time of visiting and sharing of memories will be held on Saturday from 10:00 to 11:00 a.m. at the church. Online condolences to the family may be given at www.seefeldfuneral.com. In lieu of flowers, a memorial fund is being established for Grace Lutheran Church.

Many women do noble things but you surpass them all. Charm is deceptive, and beauty is fleeting; but a woman who fears the Lord is to be praised. Give her the reward she has earned, and let her works bring her praise at the city gate. Prov 31: vs 29-31