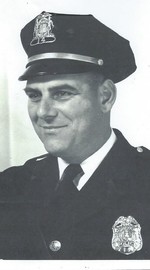 Robert O. Boheen, age 99, of Oshkosh, flew his last mission on Friday, November 30, 2018. Born on November 15, 1919, in Rochester, New York, the son of Jacob and Mary Ann (McMugrich) Boheen, Robert married Betty Nachtman in 1945, after returning from WWII.
He was employed by Eastman Kodiak as an electrician prior to enlisting with the US Army Air Corp during WWII. Robert was a crew member of a B-24 Liberator Bomber serving in the South Pacific and maintained contact with former crew members via reunions. It was during his time stationed as a Flight Engineer Trainee at Oshkosh State Teacher’s College that Robert met his wife to be, Betty.
After the war and his marriage, Robert became a police officer with the City of Oshkosh. He rose through the ranks and retired as Captain after 22 years of service. He was an avid traveler and enjoyed time in the woods and enjoyed hunting. Robert hand-built his cottage near Waupaca and his home in Oshkosh. He really enjoyed Western movies (John Wayne, especially) and Louis L’Amour books. Robert was very proud to be part of the Honor Flight to Washington, D.C.
Survivors include his wife of 73 years, Betty Boheen of Oshkosh; a daughter, Gwen Heagle of Oshkosh; a son, Craig (Diane) Boheen of Kenosha; four grandchildren, Amy (Mike) Ready of Oshkosh, Toni (J.D.) Aaron of Oshkosh, Michael Boheen of Kenosha, and Caryn Boheen of Kenosha; three great-grandchildren, Hannah, Connor, and Carter; two sisters, Nancy (Curt) Nelsen and Edna (Bob) Yates; and nieces and nephews. Robert was preceded in death by his parents, two brothers, Raymond and George Boheen, and his step-father, Walter Janes.
Funeral services will be held on Wednesday, December 5, 2018, at 6:00 p.m. in Seefeld Funeral Chapels, 1025 Oregon Street. A time of visiting and sharing of memories will be held from 3:00 to 6:00 p.m. at the funeral chapel. Full Military Honors will be given after the services. Online condolences to the family may be made at www.seefeldfuneral.com.