To share your memory on the wall of Robert Burgess, sign in using one of the following options:

Bob married Barb Metko on September 18, 1965 and together they shared 43 wonderful years of marriage and had two children, Ken and Kelly. Bob loved to go camping in Redgranite at Pearl Lake. He was also always tinkering in his workshop either in the garage or in the house. Bob had a strong work ethic and worked for 25 years are Lennox Candle. He was a loving and wonderful father and grandfather. He served his country faithfully in the U.S. Army.
He is survived by his children, Ken Burgess and Kelly (Jeff) Potratz; grandchildren, Kyle Diley, Amanda Diley, Justin Burgess, Dalton Ronski, and Evan Ronski; and many nieces, nephews, and cousins.

Preceding him in death are his wife of 43 years, Barb Burgess; his parents, Jess and Naomi; his siblings, Jack, Dick, Pat, and Paulette; and his nephew Jay Burgess.

A public visitation will be held at Seefeld Funeral Home, 1025 Oregon Street, Oshkosh on Wednesday, December 2, 2020 from 3pm to 5pm and service to follow.

To send flowers to the family or plant a tree in memory of Robert Albert Burgess, please visit our Heartfelt Sympathies Store.

Receive notifications about information and event scheduling for Robert

We encourage you to share your most beloved memories of Robert here, so that the family and other loved ones can always see it. You can upload cherished photographs, or share your favorite stories, and can even comment on those shared by others. 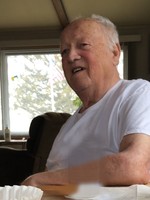