To share your memory on the wall of Robert Kumbier, sign in using one of the following options:

To send flowers to the family or plant a tree in memory of Robert Myron Kumbier, please visit our Heartfelt Sympathies Store.

Receive notifications about information and event scheduling for Robert

We encourage you to share your most beloved memories of Robert here, so that the family and other loved ones can always see it. You can upload cherished photographs, or share your favorite stories, and can even comment on those shared by others.

Julie and Colin Groff and family

Posted Feb 02, 2020 at 09:09am
Bob and Darlene were friends of my parents for years. He and I had an unusual connection, sharing Aug 6 as a birthday. Thankful that the Lord had our paths cross quite a bit over the years as it was an ongoing challenge to see who said Happy Birthday first. I'll be looking up Aug 6th each year to do that now. Hugs to Bob's family.
Comment Share
Share via: 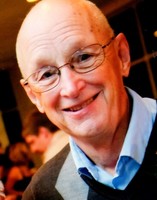