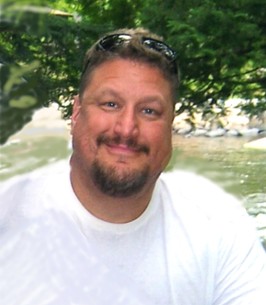 Scott graduated from Oshkosh North in the class of 1984 and married the love of his life, Stephanie Hoffman on June 15, 1991. He started his career with RPS as a contractor, after RPS was acquired by FedEx, Scott rose through the ranks and ultimately held the title of Senior Manager. He was with FedEx for 26 years. Scott continued his career with Allied Universal Security, working as an AUS Account Assistant up to his passing.

He loved spending time with his wife, Stephanie; his children, Ben and Haley; and his dogs, Kahlua, Beatrice, and Charles “Chuck”. He enjoyed “treasure hunting” which is what he referred to thrift store shopping as, with his first and best treasure, his beloved wife Stephanie, he also enjoyed reading, and spending time outdoors.

Preceding him in death are his grandparents, Blanche and Jim Davis, as well as Jeanette and Everett Unmuth; uncle, George Unmuth, who shared his birthday; mother-in-law, Audrey Hoffman, and Grandmother-in-law, Ardelle Hansen.

A celebration of life will be held at Grace Lutheran Church, 913 Nebraska Street, Oshkosh WI, on July 14, from 12pm until 3pm. A second celebration is being planned for a later date, details are pending.

Scott was a larger-than-life personality, who loved making a positive impact on other’s lives. He was beloved by many and will be deeply missed.

In lieu of flowers, a memorial is being established in Scott’s name.

Special thank you to Chadwick Graham, Matthew Kiecker, and John Hildebrandt for performing the service.