To share your memory on the wall of Virginia Davis, sign in using one of the following options:

Gini worked at a number of hospitals in Wisconsin, Minnesota, Nebraska and Iowa. She earned her Masters of Science in Nursing from the University of Nebraska at Omaha in 1981. The family moved to Oshkosh, Wisconsin in 1984, where she and Chuck have lived since. She was a nursing instructor at UW-Oshkosh for two years and then worked at Mercy Hospital in Oshkosh for 15 years. Following Mercy, she was Director of Nursing at Bay Area Hospital in Marinette, Wisconsin for two years. She returned to Oshkosh in 2003 to become Director of Quality at Aurora Hospital. Gini worked at Aurora for the next eleven years, retiring on June 1, 2014. Following her retirement, she enjoyed volunteering weekly at Aurora in the emergency department. Throughout her career and life, she lived out her values of faith, honesty, truthfulness, fairness, and above all compassion.

Gini had been a member at First United Methodist Church in Oshkosh, where she taught Sunday School for more than a decade. She was a member at Algoma Blvd. United Methodist Church for the past five years. Her faith has sustained her throughout her life and especially throughout the past 16 years of numerous cancer diagnoses and treatment and the last year of Covid isolation.

Gini loved being with people, but especially being with her family. She enjoyed gathering together with her loved ones particularly on holidays and vacations. She was looking forward to time together in Florida on the beach this coming August.

She will be missed greatly by her family as well as friends.

A visitation will be from 9:00 a.m. until the time of the memorial service at 11:00 a.m. on Saturday, June 19, 2021 at Algoma Blvd. United Methodist Church, 1174 Algoma Blvd, Oshkosh. Burial has taken place at Riverside Cemetery, Oshkosh.
Read Less

To send flowers to the family or plant a tree in memory of Virginia Davis, please visit our Heartfelt Sympathies Store.

Receive notifications about information and event scheduling for Virginia

We encourage you to share your most beloved memories of Virginia here, so that the family and other loved ones can always see it. You can upload cherished photographs, or share your favorite stories, and can even comment on those shared by others. 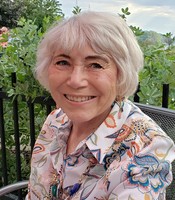