To share your memory on the wall of Wilma Ritsema, sign in using one of the following options:

A visitation will be from 10:00 a.m. until the time of the memorial service at 11:00 a.m., followed by a luncheon, on Saturday, February 22, 2020 in the chapel at Evergreen Retirement Community, 1130 N. Westfield St., Oshkosh, with Chaplain Steven Wood officiating. In lieu of flowers, memorials may be given to the Wilma Ritsema Volunteer Scholarship at Ascension Mercy Medical Center, Oshkosh, or to a charity of your choice.

The family extends a special thank you to the entire staff at Evergreen, especially Creekview Household 4, for their wonderful care.
Read Less

To send flowers to the family or plant a tree in memory of Wilma Jane Ritsema, please visit our Heartfelt Sympathies Store.

Receive notifications about information and event scheduling for Wilma

We encourage you to share your most beloved memories of Wilma here, so that the family and other loved ones can always see it. You can upload cherished photographs, or share your favorite stories, and can even comment on those shared by others. 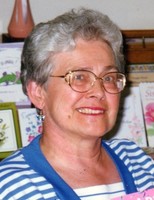